Realistically rendered koi fish swim around in a garden pond in this 3D animated screensaver from 3Planesoft. Water lilies float on the surface, with the fish swimming just below, and various rocks, branches and plants are spread out over the bottom of the pond. The fish swim around freely while a peaceful instrumental song plays in the background. 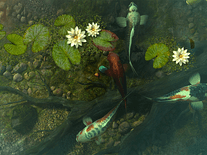 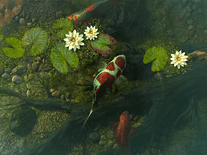 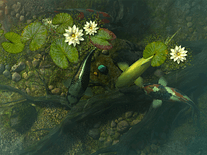 Not much, it wouldn't load. I have a pp computer Windows ten.

After trying it, this is the first screensaver I have actually ever bought. I'm not like an old person or anything either, like you'd expect the demographic for this sort of thing to be. This is a really well made screensaver. It also comes with the same screensaver but as an animated wallpaper, which is neat, but I'd imagine it'd be a bit memory heavy after a while if you're a gamer, so I probably won't use the wallpaper much. Still, really nice. I'm using the custom music feature to add ambient sleeping audio tracks so I can have the screensaver on while i'm asleep.