Realistically rendered fish and other sea creatures inhabit this virtual dream aquarium screensaver, designed by an Academy Award-winning effects artist. Shifting rays of light, ripples and an animated environment add to the realism. A fiddler crab chases the fish while cleaning the bottom of the aquarium, and there's support for multiple monitors, widescreen formatting, and more than twenty-three species of fish, each with well-articulated fins and animated eyes and gills. Settings are adjustable without exiting the screensaver. 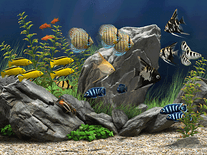 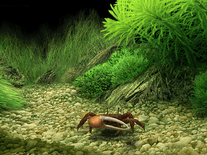 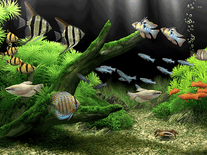 We have 2 files for "Dream Aquarium"

A highly-realistic virtual aquarium designed by an Oscar-winning animator

Designed by Alan Kapler, a special effects artist and animator who has previously worked on Hollywood blockbusters such as Titanic, X-Men and The Day After Tomorrow, Dream Aquarium is one of the most realistic freshwater aquarium screensavers on the market.

Inspired by his love of fish, Kapler, who was honored with an Academy Technical Achievement Award in 2005 for a software program he developed, left Hollywood to work on Dream Aquarium, which he first released in 2006 and is still actively developing.

Continuous development is made possible by the fact that Dream Aquarium comes with the small price tag of $19.95 (payable via credit card or PayPal). Twenty percent of profits are donated to environmental charities, with a focus on habitat and wildlife conservation, as well as climate change and alternative energy sources, and a free demo version with limited options and nag-screens is available for anyone who wants to try before they buy.

What the money gets you is a virtual tank with 27 species of fish – as well as a fiddler crab cleaning the bottom of the aquarium – that behave much like their real-life counterparts: they peck at objects, eat food, chase each other, swim in schools, and even poop! Additional species, from the Red Tiger Discus to the Long-Finned Rosy Barb, can be purchased separately for $2 each, or as a pack containing all 10 species for $8. 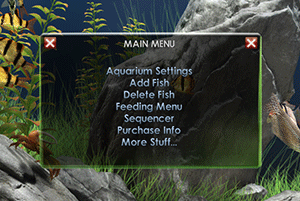 The screensaver’s settings menu, accessible via the Screensaver Settings Panel in Windows or the Screen Saver panel in OS X, allows you to protect your tank from changes being made by other users, set the maximum number of fish to allow in the tank, as well as their size, and customize various graphics settings. Most of the options, however, can be accessed by hitting the Enter key on your keyboard while Dream Aquarium is running. From there you can change the composition of your tank, feed the fish with "byte-sized" food for virtual fish, add new species, and alter numerous other behaviors.

By default, the camera position is static, showing you the full aquarium, but you can opt to have it follow one fish in particular, or several fish chosen randomly. You can adjust the air bubbles floating up to the surface, along with the speed of the fish, and even the background image can be replaced with any image on your hard drive, like a family photo.

Unless you tell it not to, Dream Aquarium will automatically connect to the internet to look for updates, such as bug fixes and improvements, once every three months. To spare your laptop’s battery, the screensaver will not run unless you have your laptop plugged into a power outlet, though this behavior, too, can be customized.

Why is not running with MAC OS?

I love it could set here all day watching it

Its good, But Crash the win 11 and frozen the machine, Send few emails to customer service , no one responded. Not recommended for win 11. Because it is not working for me. as I installed few times.

I have bought this version a couple of years back and now it still works perfectly on the newest Windows 11. What is lacking is the introduction of the new variety of fish. I would love to see more fish over on sales such as Siamese fighting fish (Betta), Guppy and Arowanas (Red, Gold, Silver). I had seen many Customers suggest on their Forum, but it seems that the Author was no longer active.

This is the best virtual fishtank out there, the fish move like the real thing. A friend of mine who maintains fishtanks for a living had to do a double-take when he first saw it. Well worth the tiny $20, and some of that goes to charity. Buy it. Even with the minor hitches on some platforms, it's worth it.

It is very nice but the demo version on Windows 10 changes my screen color temperature and makes it way too bright. It is ok for the screensaver to do this for itself but it should go back to my settings after it stops running.

the free version slows down the pc a lot which does not happen with other types of screensaver and after showing different types of aquarium there are only 2 fishes to swim on the black screen without showing the background of the aquarium itself so I deleted it after a short time and it was a real disappointment ....

really good! but needs options to turn sound off, and needs to slow the action a bit -- too fast, not relaxing

Been using the paid version of this for years, I absolutely love it!

It is an amazing screen saver however it only works on earlier versions of windows such as vista and xp. Crashes anything later than that especially windows 10. Beware.

Screensavers Planet: We tested it to work on computers running Windows 7, 8 and 10. It has never crashed. There may be a compatibility issue with your computer.

I have owned this screen saver for 12 years. I have installed it on over 25 computers including all the computers at my business. The people complaining about nag screens in the free version just need to pay the price which is WELL worth every penny. Since there is a limited amount of computers licened by the $19.95 fee I have GLADLY paid for this screen saver 4 times. The person on one site that compained there was no control of the screen saver timing and sleep mode needs to go to their PC settings where there is full control of all screen savers, including Dream Aquarium. For the people who complain that it does not work in windows 10, get a geek to fix it for you. I have had this screen saver on every PC OPSYS since Windows 7, including Windows 10 for the past 2 or 3 years.

BTW this is AWESOME on multi-screen setups. The fish swim in and out of all three screens on my home desktop.

terrible, on my win 7 PC it maxed out my CPU and win 10 it crashes.

Annoying unless you want to purchase the full version for $19.99. I'm sure the full version is awesome, but give me a few minutes to enjoy the free version before you start throwing pop ups in my face. And it doesn't specify, but I wonder if they have their website at the bottom in the paid version.

Nice looking aquarium, great graphics! Would love to purchase the full version but they donate 20% to charities and causes that I do not agree with... bummer!

very impressive love the depth and the vibrant colors

Does not work well with Windows 10

Fair, Tell me how to get rid of it

Screensavers Planet: To uninstall the Dream Aquarium screensaver, please see our help page How to remove (uninstall) a screensaver for step-by-step instructions.