Johnny has found himself stranded on a small desert island with nothing but a coconut palm tree, the wonky raft on which he arrived, and an empty horizon. Watch as this castaway does his best to survive on fish and coconuts, passing time by engaging in a seemingly endless variety of activities, and coming ever so close to being rescued. Sounds are enabled by default, but can be turned off via Windows's Screen Saver Settings.

This download only works on 32-bit versions of Windows. For other systems, please see: 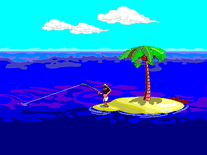 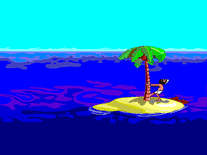 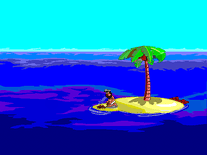 We have 1 file for "Johnny Castaway"

When it was first released in 1993 by Sierra On-Line/Dynamix, Johnny Castaway was the first screensaver to tell a story. It thus distinguished itself from the similarly popular 1989 After Dark series of screensavers, which featured flying toasters and starry nights, among others, and notably had a modular system that allowed third parties to add new themes and animations to the series. These were all relatively predictable — Johnny Castaway was not. 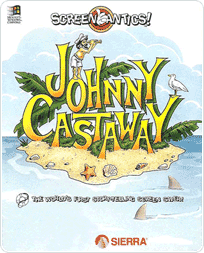 At the center of this screensaver is the stranded man we have come to know as Johnny Castaway, alone on a small desert island with nothing but a coconut palm tree. Most of his days are spent fishing, reading, running and drinking from coconuts, but every so often he engages in a new activity, or some unexpected event takes place. He may be visited by a mermaid, eaten by a shark, or come close to being rescued, but whatever the adventure is, Johnny always ends up back on his island. These scenes occur randomly, and so the exciting thing about this screensaver is that you'll never know what will happen next.

One exception to this irregularity of events is that Johnny celebrates the major U.S. holidays, including New Year's Eve, Christmas, St. Patrick's Day and Halloween. As the screensaver depends on your computer clock, it's easy to trick Johnny into thinking it's Christmas by changing the date to December 25.

It will be obvious to anyone watching this screensaver today that the graphics have not been updated since the initial release in 1993. Since most modern computer monitors have display resolutions far above 640x480 pixels, the screensaver is unlikely to employ your whole screen. Instead, it will be displayed at its original size against a black background — using less power, it should perhaps be noted, than if it were to fill the whole screen.

The biggest downside to the lack of updates for this screensaver, however, is that it may soon become impossible to use at all. Johnny Castaway was designed to run on a 16-bit operating system, such as Windows 3.1x. While all 32-bit versions of Windows, including XP, Vista and 7, will continue to support 16-bit software programs such as this one, the trend is toward 64-bit computer systems, which will not allow 16-bit programs to run.

Update: a workaround is available for getting the Johnny Castaway screensaver to work on 64-bit versions of Windows. See: How to install Johnny Castaway on Windows 64-bit

Despite these flaws, exposed by modernized technology, Johnny Castaway still stands tall as one of the most entertaining screensavers of the last two decades. As long as you have a 32-bit version of Windows, you can and should experience this important and fun piece of computer history that helped popularize screen savers.

If you need an excuse to be watching Johnny's adventures all day, here's the plea from the bottled letter that accompanied the original 3 1/2-inch floppy disk: "Stop everything! Only when you quit working, do I have a chance to escape this forsaken island. So please, do it for me — kill some time to save an old salt!"

The screensaver in my Windows 10 (64 bit) looks great, but there are two issues which need to be corrected: sometimes it crashes and shows a "general protection fault in module CSPMAN.DLL". When this happens you can't simply disable the screensaver by moving your mouse. You need to hit OK to close this window and also do a control + alt + del and force closing. This is a bug that may or may not happen in some moments, say, once or twice a month.

Another issue with this screensaver is that it should be in the original 4:3 aspect ratio, not 16:9 (I use a 1920x1200 old 16:10 monitor), or fill our screen regardless of what we are using. When the screensaver does the latter it is stretched. This is a bad idea, even if in the 4:3 original AR we are forced to see two black bars at the sides, it would have been better if had been presented this way. Because it was not created with the 16:9/widescreen ratio in mind.

Finally, if you look into the original Johnny Castaway screensaver you'll see some options like disabling clouds, background, etc. are not available in this Windows 10 version. It was available back then when you installed in Windows 95. There are a few Youtube videos showing these original options. I miss them here.

One last comment: I wonder if this Windows 10 modification can also work like the original one in Windows 95. There is a YT video (The Most Captivating Screensaver... Ever (Nostalgia Nerd YT channel)) explaining how random this screensaver can be, the original used a settings file which you could edit. At least here for Win10 I couldn't find such file. So I believe all possible scenarios from this screensaver aren't available here. Even though I saw this changing on St. Patrick's Day, that doesn't mean the screensaver is considering multiple days running. The original one changed based on how many days it was running. It's possible this one it's showing the same stuff whenever it runs.

Why doesn't someone update Johnny Castaway for Windows 64-bit? I would buy it.

This is the absolute best. Been on my screensaver ever since childhood! Thank you!

I had Johnny on my PC, years ago. It was the most entertaining thing in the office.
People used to gather round, at lunchtime, just to watch his antics.
Yes, you read that right, they watched a screensaver!

Here is a portable version of the same screensaver on this site, will not conflict with existing DOSBox installs as it uses its own. Follow instructions in README, everything is already configured, just extract and run. Works in Win10.

Back in time I had this on wnds 3.11 was 11 YO and a super slow desktop with two drives. I used to pass hours just watching Johnny eating seagulls and making his boat and throwing coconuts to the airplane... Really nice memory's. 1992. I hope sierra can make an effort to make another version of this. I😁😁😁😁

This has always been my favorite screensaver. But now, since Windows 7 is going to be obsolete in January, I wonder.. will it work on Windows 10? I hate to lose this.

Update: I'm sad that he doesn't do as much as he used to. I realize that it's not updating anymore, but I thought he'd continue to do all the things he did before. I still like it. It's just disappointing to watch him do the same few things over and over.

There is a "standalone" version available:
https://www.thingiverse.com/thing:3328477

I have automated this setup :-). It extracts the dosbox, adds the screensaver to win directory. Runs a powershell which sets the screensaversettings in the registry. The only thing you have to do is select the screensave "Johnny castaway" in your windows.

Loved it then...love it now

I think its the best one around

Awesome! It never quite repeats itself, it's always amusing, he has LOADS of little adventures, one of the best screen savers ever! The only problem with it is it's ADDICTIVE - you want to watch it rather than get work done! I don't know if anything will ever quite top it and I don't even know who wrote it. Full marks from me!

Update it. Johnny was one of my first introductions into computer capability and I even occasionally would speak to him as though a co-conspirator at school. The program should be updated and expanded. Open source code anyone ?

Write a rerun compatible with current OS's including Debian & Linux

I love this screensaver. It's by far my favorite, and I never tire of it because he does so many silly things. But, it never stays on nighttime for more than 15minutes, no matter what I set the start time at. I'd give it 5 stars if it would be nighttime during the night,rather than off and on at all hours of the day or night!

I love Johnny Castaway. This version does work on Windows 7, unlike some other downloadable versions. I have a dual display setup. When running this screensaver, my displays get all screwed up-- the second monitor becomes aligned underneath the other display (instead of side by side). This is unusable for me.

Love this screensaver. Followed the instructions and got it to work on my Mac, but I was wondering if anyone knew how to reduce the file size? After converting it, it balloons to 350 MB and turns on my fans after being on for more then 10 minutes.

Screensavers Planet: The application wrapper is so large (ours was ~170 MB) because it must emulate some essential components of the Windows operating system, thereby allowing the screensaver to run. The screensaver itself keeps its small file size, but it is "wrapped" with all sorts of additional files that allow a Windows program to work on Mac OS X. Unfortunately, there is no way to avoid this. As for your computer fans, we can confirm that the screensaver appears to put quite a bit of strain on the processor (CPU), but have not yet found a way to reduce this.

love it although it wont woke on 64bit system wish they could update it.

I remember when I was a boy, I used to sit at the computer for hours simply watching all the various antics that Johnny gets up too. Loved it back then and still do to this very day!

Brings back a lot of memories.

I had this on my windows 98 computer when i was a kid. getting all nostalgic using it in 2014.