Several species of fish swim around in 3D in this animated aquarium, enhanced with bubbles, the water surface and realistic lighting effects, all against a static backdrop of rocks and water plants. You can add your own picture or background image to be embedded into the screensaver, and import an MP3 or WAV file for background music. 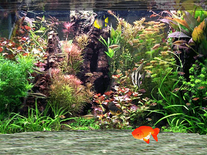 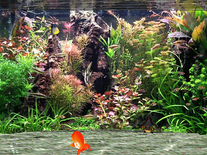 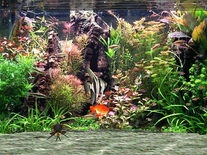 We have 1 file for "Fantastic Fish"

1) I could not activate it on my two (different) monitors, even by setting identical resolution.
2) I agree with other reviews that fish are moving not realistically.

It's good. My only gripe is that the small fish in the background don't move at all. They should have chosen a different background picture.

It is so far the most realistic "aquarium screensaver" that i downloaded...
I added a photo, (dont expect it t be in full screen), itll be in the middle and small but youd still see it. there is bubble sounds also but its not my liking so i clicked on "add my music/sound" but didnt put "music" , so it is quiet...you can change it on the settings. I just wish i could add more fish... :) deserves 5 stars, nonetheless.

I like this very much. Worked without any downloading or installing issues. The bubbling water sound can be turned off if you don't want it but I find it soothing. Most of the fish are pretty realistic but the guppy and goldfish at the front only follow each other around in a circle in the centre which spoils it a bit, and their fins do not move in a realistic way. But someone has made a pretty good job of this screensaver and it is free and works well, so how can I complain?

I like it because it is so peaceful and the fish are cute!

Annoying. It constantly makes a water sound effect and the fish don't move realistically at all.
Not a fan.

Not realistic at all. Fish move just like robots. They constantly move their fins and tails. Real fish don't swim like that at all.

needs Direct 3D, so if you are running Win7 on an older system without this functionality, you are out of luck.

It looks so reel

This so sweet and lovely gift

I love this. Thanks

Love it!! Very relaxing and enjoy the colors and movbement.

I think it's better than older