This Matrix screensaver from NicheScreensavers.com mimics the falling green code seen in the popular 1999 film The Matrix, directed by Andy and Lana Wachowski, and starring Keanu Reeves. Matrix digital rain, as it is called, represents the (encoded) activity of the virtual reality environment that is the Matrix, and is displayed on computer screens throughout the movie. You can customize the rain by adjusting the speed, cypher density and font, and you can insert coded messages which will be gradually decoded on the screen. 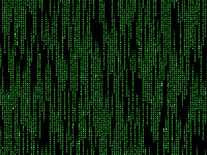 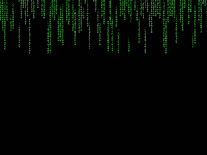 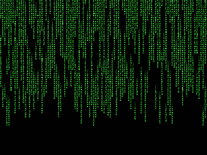 Anti-virus report for Another Matrix

We have 1 file for "Another Matrix"

does not support multiple screens

font and font size, speed, secret messages, etc can be changed in the settings

very nice but does not support multiple screens

I like it but I can't make it work.

This one doesnt expand on to multiple monitors

This is a fantastic screen saver. The only constructive criticism I would have to offer is that the custom "message" have an option to display at random locations on the screen. By default it's just front and center. 4/5

It works well, it would be even better in my opinion if it couod be added to the windows 10 screensaver menu/list.

It looks good but. But on my computer this screen saver does not start automatically as every other screen saver will. I could only see it thru ppreview and that was it :(

Giving 4 stars only because of the lack of multiple monitor support. Would be spectacular and 5 stars if all monitors were supported as all other customized settings are great!

Nice, like it. But I wish it did dual screens instead of just one screen.

It's cool u can make ur own message in it

Most wonderful Matrix Screensaver you can have! Favorite feature is the message input, and it looks absolutely astounding, it is my favorite, been a tecchy and anonymous fan for awhile now! And best of all it is free! Thank You!

The SS added value to the appearence of my living room when it came on. Very appealing

Need this to be dual monitor, only pops up on one screen.

I like it, but I've noticed a couple of problems with it.

So I was experimenting with the sliders to get the screensaver how I'd like it and I happened to notice some problems with the Decode Speed slider. First and foremost, the "Faster" and "Slower" seem to be flipped. It's really slow when "Faster" is maxed out and vice versa. Now, not only that, but how fast or slow messages decode impacts how fast or slow encoded messages appear and disappear. Now here's the kicker, when the scrolling text in the background is moving quickly and a message appears, the scrolling text noticeably slows down.

I think that's about it for the issues I've noticed. You obviously have no inclination to improve your old, free screensaver, though if you do I would most certainly appreciate it.

Thank you for your hard work. (Will definitely improve my rating if you do)

It doesnt work across multiple monitors. But otherwise its exactly what i was looking for.

I just loved it! When he released the film in 1999 it was easy to find on CD-ROMs that accompanied computer and internet magazines in the 90s. And they were simple and functional, just like this one from the download. Thanks for making it available.

I've been looking for just this screen saver!!!

So far it looks like the reel deal, will let you know more after a week of work.

doesn't work on multiple displays (only shows on display 1)

I have tried many Matrix screensavers and they have been poor at best. This one is awesome

Super awesome! Tried a few that didn't work so glad to find this one. 350kb small download is, like, blip.
Thanks to the author for this fine piece of software

how can I get this to work on dual screen monitors?

Good but only works on one screen.

@Si This screensaver's been around for like 20 years. lol... It's not garbage. Works fine on my Windows 7 laptop (as well as my XP rig obviously). Maybe there's something weird with your pc. Wouldn't surprise me, considering how many people don't know what the heck they're doing with a computer these days.

Am I able to change the color of the screensaver? If I can do it in the source code please tell me where :-)

It looks nice but it only supports one display. Other screensavers and matrix screensavers I have support multiple displays.

Nice! Like the coded message function.
Set three messages, 'HELP ME!', 'I am Trapped', and 'Please Release Me' - then sit back and watch people freak.... :)

The Mac one is better, its the cam on the screen and produces whatever it sees

Works awesome but it quits way to fast. how can I fix this?

Messages display only in alphabetic order, can this be fixed? Thanks for all the hard work!

its alright... but better than anything i have had

3 stars for not supporting multiple monitors. Other than that it's really nice.

@Peekofawr: "People, most screen savers do not work with dual monitor set ups. This is the same with stock screen savers." Is it now? Where did you come up with that from?

On my Win10 machine the STOCK screensavers DO work like a charm on an HDMI display and two more USB displays, that is, completely different display drivers, not even the same graphics card.

this is so cool

Works great! This is my first time using this website so naturally I scanned the screensaver with both F-secure and Malwarebytes and it says everything is good. I was interested in finding more screensavers by the developers so I clicked on the link in the installation folder and it just sent me to an add website. I would definitely be interested in finding more screensavers by the creator. Anyhow, it looks and works great. Using windows 10.

To those who are complaining it only shows on one screen, try buying displayfusion, you can set it up to work on both (and even different screensavers for each)

It's decent, and allows to add random messages that appear.

Don't be bias; if you cannot install it on your PC, then don't rate it. Just contact them (if applicable) and see if you can't get it to work. Don't rate it if you've never experienced it.

Looks awesome but sadly only works on your main monitor. So if you have dual or more monitors set up then the others will not go into a screen saver

This does not appear to work properly with multiple screens. It blanks and works on the primary screen, but leaves the second screen showing the desktop with no screensaver.

Excellent! Does exactly what is should, the way it should. Nice options. I especially like the coded message. Thanks!

help: cant set this as default screen saver in windows 8.1

Screensavers Planet: The Another Matrix screensaver should be listed as "Matrix Screen Saver" in your Screen Saver Settings panel. If not, feel free to contact us.

BEST. WINDOWS SCREENSAVER. EVER!!!!!!!!
Love the text thing most importantly. You are awesome.

Very cool. Only issue is that it only displays one 1 out of 2 of my monitors though... Almost Awesomeness.

this takes me back, and is the best looking Matrix Scren saver, retro and cool!