Rays of sunlight reach down from the surface of the water that makes realistic waves in this animated screensaver for Windows. A semi-transparent digital clock in the middle of the screen tells the current time in hours, minutes and seconds, as well as the day, month and year. You can switch between a 12 and 24 hour format, or opt to remove the clock entirely. 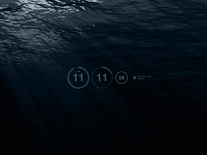 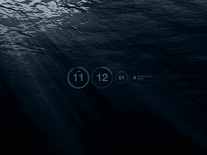 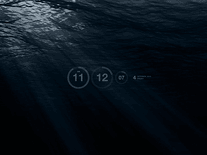 We have 1 file for "Underwater"

Avast said there was a virus a couple months ago. I saw Screen Saver Planet say there was no virus. But now that Flash is no longer supported it is broken completely. But it was a very good screensaver. Please update this.

It doen't work, cause of FI request

Unable to run. Keep getting a Fi icon when it tries to run.

I used to love this screensaver, but it no longer works now as flash has been disabled. :-(

Was really nice, but flash died on the 12th so rip.

My all-time favourite screensaver, subtle and even the cat seems to like it. Yes flash has expired so just the horrid F. Hope it gets updated.

Does not work. Will not display on my system. I get just an icon on the screen and nothing more. Found the uninstaller and removed it. Very disappointed.

Flash is dead... what a pity this screensaver was beautifull !!

Best screensaver ever. Please, someone who can revive it? Flash player killed it...

So how to make it work again or replicate it?

nice screen saver, flash kills it. how to revive it?

Such a pity that it no longer works...I believe it has something to do with flash player...

Confirmed, I loved this screensaver but flash end of life killed it. Would anyone here know who the author is? Maybe they have updates.

Screensaver no longer works as Adobe Flash is now at end of life.

Beautiful but like stated before: 6/57 engines on VirusTotal suspect a generic virus/ trojan - as with many generic warnings that doesn't have to mean much but is a risk nonetheless

Screensavers Planet: It's good to be careful, but it's also important to remember that anti-virus engines get it wrong sometimes, and you're more likely to find such false positives if you use a service like VirusTotal. All major anti-virus companies, like AVG, Avast, Kaspersky, Microsoft and Symantec, don't report any problems, and it's very unlikely that a small anti-virus company catches something that all the major ones don't. This is why we only list the most reputables ones under the Anti-Virus tab.

As mentioned by others it only works on the main screen and not the secondary monitors. Fix that and it would be a great screensaver.

Works perfectly; install and run, simple as that

As someone else mentioned, it does not like multi-monitor setups much, as it only displays on one screen. Side Tip: You can extract the screen saver file (*.scr) from the exe using 7-Zip and not have to install it using the install exe. Just rename the Screensaver.scr in there to what you want it named, then right click on it and click install to get it installed on the list.

After installing, then selecting this as the screensaver, preview caused the screen to flicker once then return to desktop. Basically, this doesn't work. Immediately uninstalled.

This is beautifully executed.

I really like this screensaver, but it doesn't seem to work with displayfusion program for dual monitors?