In the Snow Village 3D animated screensaver, the camera slowly flies over a winter town where people walk the streets or skate on the ice, and a Christmas tree and colorful lights have been put up. The town is bordered by the frozen sea on one side and by a forest on the other. Music plays in the background and fireworks occassionally light up the sky. 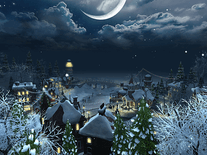 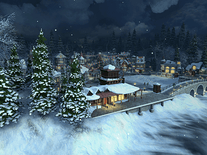 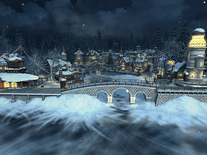 I purchased this screensaver last year, but have just installed a new SSD hard drive so have lost the screensaver, Is it possible you could find my account and allow me to use the full version again please ?
Thank You

Wish you would'nt its free, its not free ! you have to purchase the full version, let people know before they download it. 1 star because you dont tell people

Screensavers Planet: The price is listed above, next to the download link.

Awesome screensaver. People giving it low ratings because it isn't free expect too much. There obviously was a lot of work put in to this by somebody, and if you enjoy then pay for it, it's not much.

Very nice winter village. However, there are some flaws. The people seem like pac-man figures bumping into one another; a little kid runs around as if looking for his parents; sunglasses on some at night; if you catch a glimpse of a person he/she is really creepy looking; people don't have a mission - no shopping bags or even purses; no family groups; fireworks that no one looks at (why are they there?); windows have no panes, curtains or blinds (are there even people inside the buildings?); no smoke from fireplaces; a road that leads to a tunnel; no car traffic; clouds behind the moon; no cloud movement; 7 ice skaters constantly skating in a circle; only red-blue-white lights on the tree; a church where no one enters or leaves; no rail on the bridge leading to the church; a row of snow bound houses behind the main street that seems like no one lives there; a frozen tundra with flat roofs instead of pitched ones; open doors in apparent sub zero temperatures; no stores; signs; unidentified area outside the village as a bay/river/sea. Seems like an unfriendly and lonely winter village to visit.

**CORRECTION** Beautifully done, and I was even ready to shell out the ten bucks until the fireworks started. BUT...as it turns out fireworks can be disabled via the settings. I paid the money and it's worth it. 5 stars. Thanks!

I almost fell in love with this screensaver. The whole scene is 3D so the camera moves through the streets at beautiful angles. There's villagers that each have their own unique look and they mill around the town doing wintertime activities. So it was my favorite screensaver on here. BUT, only a minute into the screensaver, a big nag window pops up saying it's an unregistered version. The message window is big and stays there for the rest of the duration. Doesn't that defeat the purpose of a screensaver when you have a stationary image that never moves? And the only way to get rid of the rather annoying thing is to spend money and buy the screensaver. Also defeats the purpose of a "free" screensaver when you can't even enjoy it for more than a minute before it intentionally annoys you. Two star rating for that. There are a million better ways they could have done this. A window that doesn't ever move defeats the purpose of a screesnaver.