The Retro Sci-Fi screensaver makes your computer look like one of those displays in old science fiction movies and television shows. Various scientific-looking and green-colored graphs, circuit boards and computer terminals are shown on a futuristic dashboard. An alternative version colored blue instead of green is also available: Retro Sci-Fi Blue Edition. 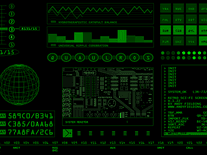 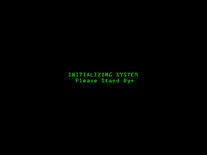 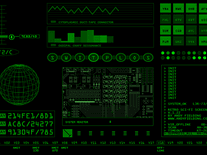 I really like this screen saver, however while it was running, it went from black and green to a variety of colors, and I'm wondering if there's a way to make it go back to that permanently.

Pretty cool but doesn't work in multiple monitors and not only that but it doesn't blank out the other monitors, so the extra monitors keep showing whatever it was on them

Its a very nice

I really like this screen saver. I just wish it worked on multiple monitors.

Best screensaver in my opinion

Amazing. Works perfect and after a while it changes color to a really color. Would recommend to any nerds out there

Beautiful, but it only supports one screen which doesn't do the job for me :(

I appreciate they are offered free of charge. The only thing about the Retro one, not the Blue, is that the Retro one's many colors that come around after it runs are garish, starts taking on the look of a game. I wish there was a way to keep it in the color scheme as it first starts. But, a big thanks!

This is actually really cool. I 100% recommend trying!

I think this screensaver is so cool! It is definitely one of the best I've found!

I think this screen saver is the bees knees, mutts nuts, the polecats purple plonker.... Yes it is only single screen, but my god! what a screen, its fantastic :)

"In no event shall the author be liable for any damages whatsoever (including, without limitation, damages for loss of business profits, business interruption, loss of business information, or other pecuniary loss) arising out of the use of or inability to use this software or documentation, even if the author has been advised of the possibility of such damages, so there."

10/10 you clever, sassy artist. Props to both you and your amazing screen saver.

BLUE VERSION HAS FINALLY BEEN ADDED TO THE SITE! Just search "retro".

Nice screensaver and VirusTotal detect nothing.
Thanks !

OK, same its not multiscreen.
Installed on windows 10, not problems (works straight out of screen saver controls inc preview).

Still looking for something to beat the 2 screen HAL 9000 screen saver!

Funny, and working on Windows 10

do not support multiple monitors

It works great in Windows 7 Ultimate 64 . Am going to try it on 10 .
The three word randomness that comes up near the top is funny .

"Error in modMakeRandomWord.LoadArray: 5 invalid procedure call or arguement"
Anybody knows how to fix this problem? I really want to us it

I love this screen saver. I have a 32 inch monitor that lives in my living room to serve as both my computer and my TV. This provides a fun background when its inactive.
Instillation was easy, it took a like 5 minutes after install to start working (loading the cache or something I'm sure). I would install again.

Very cool screensaver. If you let it run for a certain amount of time it starts to turn color.

Absolutely fantastic time & effort has gone into this cool-as screensaver, well done bro!
To "Eric" who says this does not run in extended desktop mode...I found out by mistake that

it can "integrate" with the screensaver you already have set in place: I have W7 Ultimate

x64, and I have the Green MATRIX set already, but if you go open the retro and hit the

it to run, but this awesome RETRO scrensaver will also run on your "Primary" desktop

monitor the moment you hit the "Preview" button...if you get my drift Eric?! Have a play &

2).
Yep definitely works with the MATRIX screensaver set as the default scr & just use the "Preview" mode for the RETRO Screensaver to have multiple monitor display MATRIX and the RETRO will display on your primary monitor! - but not any other screensaver will work in this mix. I see someone else on W7 x64 says here it dont work on their system ... well I only know whats happening here on my OS sorry. Also ... I have not seen the black & white colour change mentioned - only green all the way in Preview-mode ... damn this rocks! "Kei Runga Nö Atu Andy Fielding! (It's All Good Bro). Andy Fielding.

Totally Rad! Gnarly to the bone Cheesters! Can't wait to make my i7/64GB/5TB system look like my Commodore 64!

Really neat! I just wished it was in color all the time. Anyway to make that happen? This is the coolest screensaver I have ever seen.
If it would stay in color, that would be something I would pay money for !

This is actually pretty amazing! I feel like it's the StarCraft menu all over again haha, props to the creator Andy Fielding!

I like it, looks sweet with my alienware r13 with the green keyboard backlight, also i got windows 10 and preview works just fine, no problems

It's cool to look at. I noticed that there are some items that "go offline"... I can tell a lot of work was put into it to make it work the way it does.

Screensavers Planet: If you have a 64-bit version of Windows, you can find it under C:\Windows\SysWOW64, where the file is named RetroSciFi.scr. On 32-bit versions of Windows, it is probably installed into the C:\Windows\system32 folder.

Personally, I don't feel that the snapshots do this one justice. It makes my computer feel like a data console on a futuristic starship.

Very nice, but only works on one monitor if you have multiple display (I have 4)

I love Retro Sci fi :D It's the best

Where can I find the blue version?! D:

OK as has been said DOES work in Windows 10, only that the preview does not work. This stopped me persevering with it initially.

+1 for Monastic Cuttlefish Availability, that gave me a good chuckle for a while!

blue version works in Win10 64bit, love it! Preview didn't work but the actual screensaver does

Looks and works great, works in Windows 10, not filled with malware. What more could you want?

Love it easy install, I'm a total sci fi geek and this is awesome.