This innovative clock screensaver from PixelBreaker displays both the time (hours, minutes and seconds) and the date (weekday, day of the month, and month) of the current year in a circular fashion, with each circle representing one division of time. The circles approach their maximum size when the element reaches its maximum, e.g. when the seconds circle arrives at 60, or the weekday is a Sunday, and all circles will be completed at the New Year mark. Many languages are available, and you can optionally customize the clock's appearance, includings its colors, the thickness of the circles, and the font size. 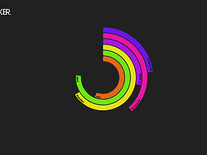 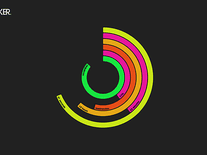 We have 1 file for "Polar Clock"

This screensaver has a very nice minimalistic design and it gets the job done just right. Everything is configurable, from the thickness of the lines to whether or not the text flips when it goes upside down.

This screensaver requires Flash to run, which may prevent you from getting it working at first. However, using Clean Flash Player (a variant of the still-supported Chinese version of Flash Player with spyware and adware removed), the screensaver works just like it used to.

IT DOES NOT WORK AND IS VERY DIFFICULT TO DELETE! DO >>>NOT<<< DOWNLOAD!!!

same issue as Deebz, Flash is discontinued so now this ss is broken

I just went up the shop an left the PC on. When I returned, the Polar Clock had been replaced by a weird Facebook logo???

So I'm back here to download Polar Clock again. I hope this doesn't become a thing...

So I return, having tried to install the Polar Clock, which failed. The screensaver message telling me that Polar Clock has only partially been uninstalled ... AFTER having installed it twice as administrator.

The audio glitches. At least it does in preview mode

It crashes after 1 minute (literally) and messes up you PC. In my case it removes the taskbar and puts my CPU and GPU (i7 -8750H and GTX 1060) under max load within 10 seconds which doesn't make any sense considering were talking about a screensaver, not GeekBench.

Tempus Fugit !
Excellent Screensaver. Almost hypnotic when it kicks in. I could sit and watch it for seconds, minutes, hours, days, months if only I had enough time.... Great to see it all turn briefly blue on the new year.

I've not experienced what Nathan experienced regarding the hanging of 'Explorer' ... But then, I never set my PC to 'hibernate', don't see the point, as my PC is either on and being used, or showing this great clock, when I'm pottering around making tea, other than that, it's powered down.

It's pretty cool, however, whenever the screen saver starts up and then the computer goes to sleep after my specified amount of time, explorer.exe closes. I wrote a batch file to fix this but it is an annoying bug.

wow so nice to have a simple yet stunning clock screensaver

this thing is cool, you should do more!