In this Starry Night animated screensaver from MSN, waves roll onto a sandy beach under a night sky full of bright stars. A small rowing boat is softly rocked by the waves, a lighthouse shines its light onto the sea, the moon shines brightly in the upper left corner, and occasionally you can see a shooting star. Includes sound effects of breaking waves. 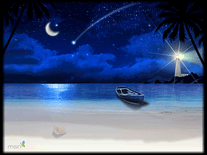 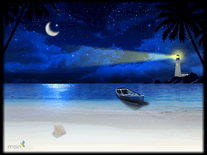 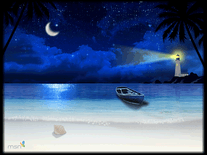 We have 2 files for "MSN Starry Night"

This is not bad, a bit cartoonish and stylised. The star in front of the moon is wrong of course as it is impossible, and the boat bobs up and down like it is on a spring. Also the lighthouse would not be shining on such a bright tropical night! The reflection is good though and the rather loud wave sound can be turned down. This is another that does not fill the screen though, perhaps it is dependent on my screen settings. It also says it will not work well as I am not using glass at the moment, but the appearance is actually fine.