This fireplace screensaver was created by MSN, a subsidiary of Microsoft. It features a seamlessly looping video recording of a fire burning under a brick mantelpiece. The logos of Microsoft and MSN are placed unobtrusively in the bottom left and right corners. 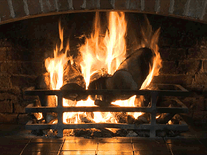 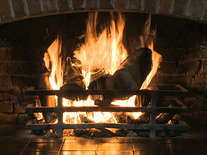 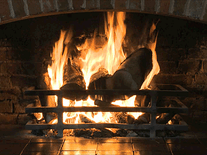 We have 2 files for "MSN Fireplace"

Says I can't use screensaver because it doesn't support the latest macOS.

Works great! But I wish it works with dual monitors too.

does not work with the latest mac os catalina.

I like the concept, but the animation for the flames is rather fast, which makes it fairly unrelaxing to have on the screen. The point of having a fireplace screensaver instead of, say, a waterfall or moving geometric shapes, is so that it can double-duty as a relaxing image to watch. As this one moves fast enough to induce mild anxiety, I'd say it meets only half of its goals. There's no option for 2.5 stars, so I'll round up to 3.

No sounds, even tough their is a speaker icon for sound adjustment in the screensaver HUD.

PLEASE ADD SOUND PLUS MAKE THE FLAMES A LITTLE SLOWER AND TADAA.
ITS GOOD

I love it. I prefer quiet screensavers like this because I often fall asleep watching something on my computer, and loud screensavers wake me up. I think the flames are good just the way they are.

nice screensaver but there are no sounds to it

This screensaver is very realistic and I like it a lot. The only problem is that it crashes after a awhile...will not keep running.

Looks great, but sound doesn't seem to work in Windows 10. Knocking off a point because the sound of crackling flames really adds to the effect.

I think it's beautiful and gives off a warming affect

Flames are too fast