In the Midnight Beach screensaver for Windows, the waves of the sea slowly roll onto the beach where a small fishing boat rests in the sand. The moon shines bright and large behind the clouds in the distance. If the animation does not fill the screen, enter the settings menu, click the "Position" tab and tick the box in front of "Resize to fill screen". 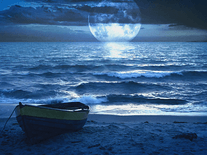 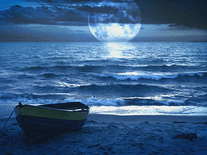 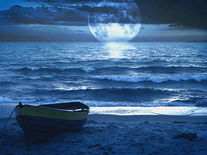 We have 1 file for "Midnight Beach"

No sound, settings that come up have nothing to do with the screensaver

I think its really cool! :)

It's one of my favorites. It's very peaceful and beautiful. I am SO GLAD there's no sound! I often fall asleep with my laptop running, and screensavers with sound wake me up too often.

Whoever said that the boat "killed it" for them is ridiculous. The picture CLEARLY shows a boat.

it is beauitful and very peaceful

loved it till i saw the boat. KILLED IT!

Beautiful. But as Rain said, it needs sound. So I found a few pages in, 'WaterWorks. It comes with about 75 variations of water fx, from Beaches to Waterfalls, and full sound fx.

Really cool, except I have two monitors and it only shows up on the one set as my Main.

Utterly gorgeous, and highly realistic. I wish it came with matching wave sound effects, but that's a small complaint.

All good seem to work with no virus's.

good, if it would have a settings of brightness control, would be excellent

I love it, but it stopped working. Are we sure it's for windows 10? I placed it in every folder imaginable and it appears on the list of screensavers, but when I choose it, it does not execute. Just a blank screen

Screensavers Planet: This screensaver was made using an older version of Screensaver Factory 6 that unfortunately does not support Windows 10. We did not create this screensaver, but have now repackaged it in a way that should make it work on Windows 10. Please post to our message board if you continue to have issues.