A wintery screensaver featuring an illustrated image of a village at evening, with a Christmas tree in the street, lighted by lanterns and the houses. Snow falls down and clouds of smoke bounce around the street, while a night sky and the mountains are visible in the distance. 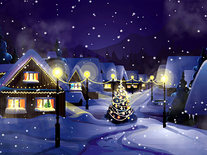 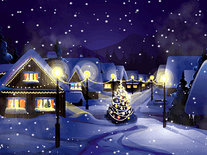 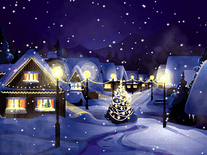 We have 1 file for "Christmas Snow"

Great quality, Very pleased! Working perfectly on my laptop and I have no problems with it.

Installed it on an old Win XP machine. It displays fine with animation except for a gigantic thick white "X" across the picture. The "X" looks like it was meant to be part of the picture! Has someone hacked this app?

Screensavers Planet: No, this sounds more like a compatibility issue between your old computer and this screensaver. Feel free to contact us.

i love it. It really gets you in the mood

Very good and Christmassy no registration or virus.

It is so beautiful.A feeling of pure life and peace.

This is an absolutely beautiful picture. Thank you very much