Count down the days, hours, minutes and seconds until Christmas Day with the Christmas Countdown screensaver for Windows and Mac. The flip-clock style countdown, with a waving Santa Claus just behind it, stands in the middle of a cozy room with a Christmas tree, a burning fireplace, two elves, a steaming Christmas dinner, and a window looking out on a snowman, Rudolph the reindeer and snow falling outside. Once Christmas arrives, Santa waves a "Merry Christmas" banner and the elves inspect the food and presents. On January 1st, the countdown will reappear and begin counting down to next Christmas. 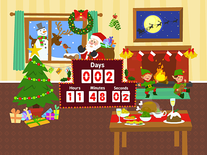 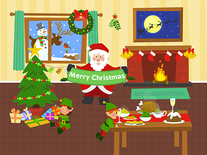 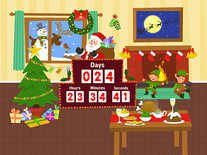 We have 2 files for "Christmas Countdown"

there is no more flash player, your screensavers do not work

I downloaded this screensaver but it says that the developer needs to update it so it can fit the software that I have. Please fix before Christmas!! I use a macbook btw. I give 3 stars because it looks cute

Hey
Tried downloading this, but as it is 32bit it is not working on macOS Catalina, would love if it is possible to have a look at this before Christmas

all christmas screensaver is not showing on latest flash version please update the screensaver. really need it.

Screensavers Planet: Yes, that latest Flash Player update on Mac breaks the screensaver, unfortunately. I'm afraid this is out of our control, hopefully it gets fixed in a future version of Flash Player. The screensaver still works on Windows.

I have the latest version 32 also. It worked until yesterday for 2 years. i updated my Flash on my mac. Still doesn't work. Really disappointed. I really liked this. Will there be an update? It doesn't work on my mac now.

doesn't work anymore pop up window says would prefer flash plugin 27,
i have flash 32 which is updated version

Does not work on Mac right now

(rated 3 because I am N/A since it didn't work)

Screensavers Planet: Please make sure you have the latest version of the Flash Player installed. On macOS, you can check this via the System Preferences panel.

I really liked the screensaver and it worked perfectly until I downloaded Mac OS High Sierra. Now it only shows a black screen.

Screensavers Planet: We've updated the screensaver, please download and install it again. We hope that solves the issue. If not, please post to the message board.