Colorful pipeline structures are formed in 3D on your screen in this classic animated screensaver for Windows. The screensaver's settings panel allows you to customize the style and joint type of the pipes, and to use a custom BMP image file as its surface. 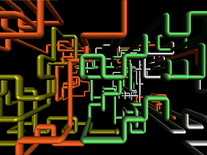 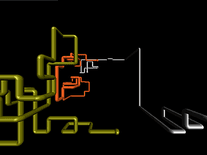 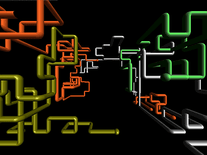 It's horribly optimized, running quite slowly

Great, had it at work, and have always liked it.

I love this! Are the teapots still in it?

Screen saver works in the preview section of the Screensaver settings but doesn't work normally anyone know a fix? Kinda weird. Otherwise it would be 5/5 if it worked

Love it :) Love the candy cane when "textured" is selected but no texture is chosen. Can go super fast as well :) Excellently done, thank you so much!!

Perfection doesn't have to exist for a 5 star review. Just dont leave reviews if you can't separate the ideal true perfection from 5/5 level satisfaction with a screen saver.

i really enjoy this. i got kind of scared when the yellow pipe got really close but then i remembered that it was just a simulation -- that's how realistic it was. it's crazy i highly recommend this.

What can I say, I'm old school and I love this screen saver. Download and install worked great. I am a little disappointed that I haven't seen a teapot yet. Can anyone remind me what the settings are to enable teapots? I'm not sure I've done it right. Tnx

YO! THIS IS MY DREAM SCREENSAVER! 10/5 STARS, IF YOU WANT A EASTER EGG: SELECT IT, GOTO SETTINGS, TURN ON TEXTURED BUT DONT ADD A TEXTURE, THEN EXIT

I think this screensaver is very nice

it didn't work. Win 7 kicked me out & it wouldn't load

God i really did miss this. i do so love they way the pipes go crazy from the start to the end and mix with other pipes. after all, chaos loves company. although... i had to manually turn it on every time....

Doesn't let me use it as my screensaver, instructions don't work AT ALL.

This is NOT the Windows 98 version of 3D Pipes. This IS the Windows 7 version. The quickest way to tell is to look at the configuration page in the program. the Win98 version has a resolution setting, from coarse to fine. I was supremely disappointed when I lost the Win98 version as it is missing that fine setting.

set the texture to a purple cloud file and it looks nice. would def recommend if you used to watch this back in windows xp era or if you like the neverendingness of the pipes.
works great for windows 7 home basic btw!

every time I see this I hear pyro say "ASOT"

Nice! I missed my pipes. It's so nice to have them back. It's a classic. Thanks!

Thank you so much! Exactly like the original that I miss!!!

Great if the thing worked. downloaded and installed twice but guess win 10 is not having it. sucks.

Awesome! Just like the original and easy to install and set up as screensaver.

Perfection does not exist so I put the maximum score is 4/5.
Some of my clients will be happy with this screensaver.

Works for me on Windows 10. Just like the old dayz! Thanks

it don't work in any windows folder

Nice remake, would this be the original one I had given 10 stars for this screensaver!

nostalgic but it won't work

@mantininc Try using the "Print Screen" key on your keyboard

Love it. How can I take screen shots of the pipes. they disappear as soon as u move the mouse.

I like it, but for some reason it flickers and blinks. Is it because I use Windows 10? Other than that, it's a great screensaver!

I remember a version of the 3D Pipes had the "flex" option, but this one does not?

Very nice, but on my system (Windows 7 Professional) it doesn't start itself. I selected that it should start after one minute, waited three minutes and nothing happend. If I start it manually it works fine.

Superb,works perfect on my Win 7 pro.

This one worked great on both of my computers,1 running Windows 10 and 1 running windows 7 that is running 2 monitors and separate 3-D pipes screensaver windows.

omg ive been wondering how to get thing thing forever!! thank you!! but its ironic that the fist time i saw this screensaver was on a mac, lol

Wonderful!
How well I recall the good old days of MS Windows NT.

Hmm... I downloaded the .zip file and dragged it to my desktop, there I extracted the file but nothing worked? Btw I am using windows 7, and I probably won't remember to check this so DM me on Instagram, @griffni

Screensavers Planet: For a screensaver to be listed in the Screen Saver Settings panel, you can either right-click the screensaver file where you saved it and select "Install", or move the file to the Windows folder on your hard drive (usually C:\Windows). Right-clicking the screensaver file and selecting "Install" has the added benefit that it will automatically open the Screen Saver Settings panel, so you could try that even after moving the file to your Windows folder.

Does anyone know if this version has the teapots

Screensavers Planet: To the best of our knowledge, this is the Windows 98 version of the 3D Pipes screensaver, and only the Windows 2000 version contained the teapot easter eggs. Unfortunately, Microsoft allegedly has a 'no Easter Eggs' policy now.

Screensavers Planet: Unfortunately, there have been many complaints about flickering on Windows 10 for all kinds of full-screen programs, including games and screensavers. Please try updating your graphics drivers to the latest version.

Love it, but does not work properly on windows 10.

Not working properly on Windows 10, it flickers and its annoying. However, didn't have any problems with Windows 8.

Best screensaver ever. Used to have it back in the day on my windows XP, and now I can have it everywhere!