Join the dolphins, sharks and other underwater creatures as they swim around the ruins of Atlantis, the mythical island first mentioned in an allegorical story by Greek philosopher Plato, where it loses the favor of the gods and consequently submerges into the Atlantic Ocean. This 3D animated screensaver frequently changes camera perspective, showing the ruins (and fish) from various angles, while music plays softly in the background. 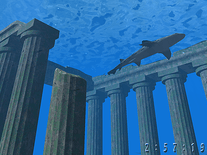 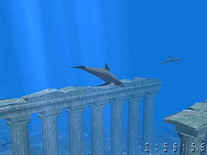 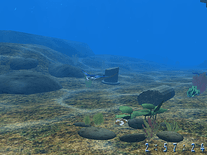 This is clearly a computer generated as the columns and sharks are not like real ones, so there is a loss of illusion of reality. The music is nice, the changes of view good though a bit jumpy. There are a few customisable settings. The big shame is that until you download it, it is not clear that this is not a free screensaver, and after a nice look around a large buy now kind of ad comes into the middle of the screen. I appreciate that these cost money to make, but a little warning would be good as I am not in a position to buy things at present.