This Nvidia-sponsored screensaver features an old train traveling through the American backlands on a western railway. The train is shown traveling from various viewpoints, while the current time is displayed on an old analog clock at the bottom right of the screen. The clock can be disabled, sound effects and music can be muted and an "old movie" filter can be added from within the screensaver using keyboard shortcuts shown at startup. 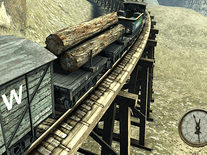 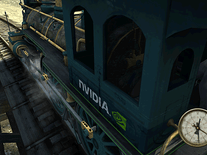 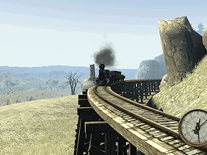 We have 1 file for "Western Railway NV 3D"

used to run great,,,,but now it goes blank then causes a blue screen of death used to use this but not now was free now it sucks and dont work at all

Really something but is "twitchy" when on. The train does little jerks which you may be able to tolerate. Installs a lot of other material and links and a desktop icon.

Great looking screensaver. Locomotive is a US 4-4-0 American Standard, not of English origin as Rick claims. I do agree that the terrain looks nothing like Nevada, but nonetheless its still a cool screensaver.

Very animated and not of the USA, unfortunately. I've never seen Nevada look like that and it is a train from England. I was looking for a USA train. Therefore only 3 stars from me. Although, it does run well on my Win 7 machine. Thumbs up for that anyway.

This is the most AWSOME screen saver I`ve ever seen ! I Love it ! I watched it for 30 minutes and could not find a repeat of the same scene. Outstanding effects.

I loved this screen saver when I bought it from 3planesoft. I don't like it nearly as much ripped off.