Take a look inside Santa's workshop on the North Pole, where elves are busy preparing presents to be handed out at Christmas time. In this animated screensaver, four elves are at work putting together toy cars and planes, then send them on their way through holes in the walls, while snow falls outside behind the windows and music plays in the background. A calendar on the wall at the back of the workshop counts down the days until Christmas, and occasionally Santa Claus himself peeks in to check on the elves' progress. 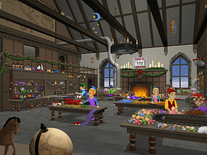 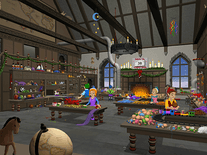 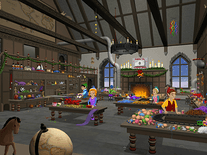 We have 1 file for "Santa's Workshop"

I have the full version of this that I bought when it came out in 2000. It works perfectly on Windows 10.

I used to love this screensaver but I recently tried to install it again on Windows 7 and it wouldn't run. Flash only runs in browsers now, not as a program on Windows so it won't work.

It's definitely worth 5 stars for fun and animation, but it's no longer compatible with Windows.

I love it but what do you mean, Exact the screen saver file from the Zip archive you downloaded to the windows folder on your hard drive, then right click it and select Install.. I have it saved to my desktop but I can't get it into my screen savers... How do I get it into there..

Very nice screen saver. I bought it back in 2000 but I no longer have my registration key that came with the purchase. I believe it unlocked more features. The limited version is still pretty nice though.

I love this screensaver. I bought the full version about 10 years ago and have used it every holiday season since.