Hyperspace is a space flight simulation screensaver that allows you to cruise through the far reaches of space, fly between the stars, across oozing cosmic planes, and through endless shimmering tunnels. You can optionally adjust the speed, view depth, field of view, number and size of the stars and the resolution of geometry, and set a limit on the frame rate. 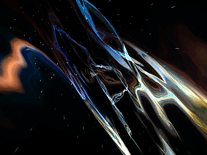 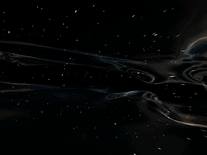 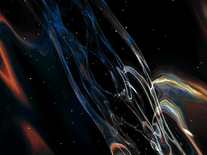 We have 2 files for "Hyperspace"

Epic, and it works on both screens

This is an awesome SS, set the frame rate to 30 or 40 and it won't heat up your machine, and gives great resolution; plus I have two screens and it works GREAT. love it Kudos to the designer(s)

Too much fast movement and flashing lights, very distracting. Not relaxing.

It starts and locks up after 5 seconds.

Works perfectly on my laptop with Windows 10

Like the wormhole effect, In and out graphics of hyperspace tunnels.

Agree - add tick box to disable sweeping/swooping. I want something like the Enterprise going to warp.

I love this screensaver, but it doesn't work on Catalina

Great concept but the amount of turns and random angle shifts that it makes is sickening and makes it almost unwatchable. There are no settings to determine the angle of motion and turns which is a limitation that makes this screensaver all but unusable. Why does it go backwards? That's stupid... Otherwise great!

Great except it only runs for a short time, there are no setting to have it run in a loop or longer, would be nice to have the creator inform us on how to make it run longer or even upgrade it. It is free so would not expect a reply. Only gave 4 stars because of that but will give 5+ stars for video display.

It's terrific. I just wish it could be less swoopy (constantly altering the direction of view) and spinny. Setting it to speed 1 or 2 helps a lot. If it had additional controls for "spinniness" and "swoopiness" it could be much more perfect. I would like to see more forward progression through "hyperspace", fewer spins and banks and turns.

Sadly will not run

This screensaver would be perfect if it weren't for the constant spinning. It's making me dizzy.

Pretty good! Quality is high and its very pleasant to look at. Only issue is that its very involved, if it started playing I would pay attention to the screensaver instead of waking my monitor back up.

Fantastic screensaver but far too many people, like me, are having issues with it on Mac OS Sierra and High Sierra. For me and many others, this screensaver only runs for less than a minute, then the default mac screensaver turns on. Please update this screensaver! Otherwise I love it.

This is brilliant! I can't stop watching it

After upgrading to macOS High Sierra the screen saver runs for 3 seconds then the default macOS screen saver starts and Hyperspace goes away. So sad :( WHY did Apple do this?!

Very nice, works with windows 10 and displays on all my monitors!

When I upgraded my iMac to the High Sierra OS last night, this screensaver stopped working. It runs for about 3 seconds and then it switches to the Mac default screensaver. I talked to Apple tech support and they say that OS 10.13.1 will require some apps like screensaver that aren't fully Mac compliant to be updated. I love this and hope that you can give me an ETA on a new version that works with the newest Mac OS

Hands down, the best screen saver around. Would love to see an update but the options and detail are phenomenal. Excellent!

This is the screen save I have ever saw. One word, Brilliant!

My favorite at the moment. This is one of the most entertaining to watch. The movement is not unlike that of a roller coaster - and like a roller coaster, this may give ya a li'l bit of dizziness.

I hope, somebody will create a "Nebulating Hyperspace" screensaver in future.

One of the most visually captivating screensavers I have ever seen. I highly recommend it. Thanks for sharing.

It look amazing on two monitors! I recommend this.

A stylish and dynamic screen saver.

Fantastic, in comparison to the rather tired old native screen savers provided. Little has changed since the introduction of the various display transition options for the desktop pictures folder.

It supports multi-monitor, has a cool aurora. Love it!

This is amazing! so smooth and practically an infinite animation so you never get bored watching it because its never the same!