The Basic Edition of the HAL 9000 (Console) screensaver features 28 separate animations and runs as a re-recreation of the eight-screen HAL 9000 console from the movie 2001: A Space Odyssey. In this film by Stanley Kubrick, as well as the series by writer Arthur C. Clarke, HAL 9000 is an artificially intelligent computer that can interact with the crew and control the systems of the Discovery One spacecraft. No music or sound effects are included. 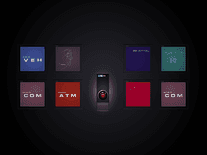 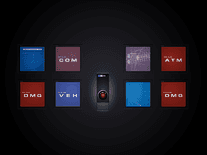 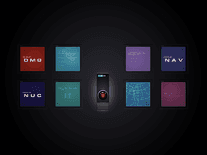 I'm the creator of this HAL 9000 screensaver and have just released a remastered 4K version over on YouTube, check it out at halproject.com

Excellent, I have it running on High Sierra using Flashplayer29-mac-debug version. I sometimes have to reinstall but it's worth it. Thanks for the good work.

I used this for many many years. all my workstations. at home, at work, my wife computer, my parents. and sudenly 2021... is this end of screensavers both on mac and pc? how to work around? solution plese /// this whitebox app is only on mac, and older versions of os. so its ded end

Absolutely loved this screensaver for years. Always got a few comments from my coworkers. Shattered that it has stopped working now that support for Adobe Flash has ended.

I've loved this screensaver for years. Any chance of it getting updated to work with the MacOS again?

It no longer works because of security concerns and the demise of abode flash. But there is a workaround if you install the "white Box" app from savehollywood which turns a video file into a screen saver. Download the video file from youtube, whitebox will run it as a normal screen saver. I used it and it's been working great.

Cool screensaver, however, it doesn't appear that I can uninstall it and it does not work across multiple monitors.

It's very nice and useful on Windows 10!

The Hal 9000 screensaver installer is not able to detect the AdobeFlash plugin V32 although it is installed.
Is there a fix for this?

A brilliant screensaver, but unfortunately it breaks completely under Catalina for Mac. Hopefully some wise and generous individual will correct this issue and share with us the greatness that is HAL-9000. Normally 5 stars, but until the Catalina problem is resolved it's just 1. :(

can't open on macOS High Sierra 10.13.6, not even the advanced version. any fix for this?

Unfortunately, the Screensaver breaks with the update to macOS 10.15 Catalina. Probably because the Flash plugin it is using might be 32-Bit? Anyone know how to replace the plugin with a 64-Bit version? Or get it to use the latest Flash player? Or how to take the Flash video of the screensaver and repackage it as something that is viable for a 64-Bit only OS?

FYI, I have several versions of the REAL version of this, if anyone knows how to upload files instruct me and it's yours

Screensavers Planet: You can upload files through our Submit a screensaver page.

Excellent! Captures the look and feel of the HAL Console... sometimes I just sit and watch the many animations on the screens.

The repackaged version works properly on High Sierra, so thanks! But may I add my own request for an updated Advanced version? With multiple monitors the effect is mesmerising.

Very happy to at least have the Basic screensaver update; any chance on the 4.0 Advanced Version being updated as well? I run multiple monitors and it was a gorgeous thing to see the individual screens on each one.

I love it. I used it to replace an older version on my Mac and this is much faster. I'm using High Sierra too, so I got that version.

There's an Advanced version of this screensaver which has all the animations full-screen, I think that's what Justin is referring to. If it's possible to repackage these screensavers so they work on High Sierra, is there any chance you could repackage that version too?

Hey that new version HCJ uploaded works on Sierra, but I liked the full screen Hal version better. HCJ can you make that one? I love this screensaver!

Screensavers Planet: That was our response to HJC's review, sorry if that was unclear. That version should display full-screen, but it doesn't for you? Please contact us or post to the message board and I'll look into it.

Does not work on OS X High Sierra.

Screensavers Planet: The High Sierra update for macOS breaks a lot of screensavers, unfortunately. Please try this repackaged version. It should work on High Sierra.

I love it. 2001 is my all-time favorite movie. I can pull up music from the movie and then activate the screensaver and it is a gas! That is all I need, man.

Only working on 2 of 3 monitors

On the original HAL 9000 a small screen would POP UP first and then expand to fill the screen. The nominal displays would be overridden by emergencies or problems. I was hoping for a HAL like system that kept track of the PC housekeeping. A small pop up showing hard drive, network, etc and then if the computer encounters an error it goes to the system screen or SYS showing what is happening.

Looks great, but sometimes it activates and I can't escape it once I'm back at my desk. Maybe this is a bug or perhaps it just thinks I want the pod bay doors open.. five stars if fixed!

Love this!! Have had it for several years now & visitors love it too! How much work would it be to port this for 3 or more monitors? It is even possible witout the source code? TNX-

Turns out the Flash update is a known problem. I did a system restore to get rid of the update and downloaded MS's hide and show updates tool.

Runs fine on Windows 10, 64-bit machine. There are sometimes duplicated displays on two or more of the eight screens, but generally looks very good.